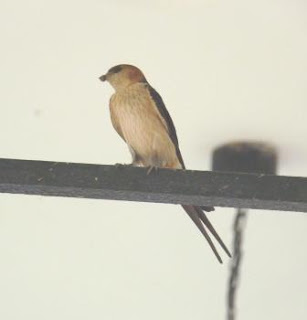 When we first moved into our house El Recuerdo, there was an old Red-rumped Swallow's nest in the porch close to the kitchen door. The following year a pair nested in an old pigsty but since then nothing. Our neighbour has a pair nesting in his garage, as well as several pairs of Barn Swallow, but for many years, swallows of both species (as well as House Martins) would use our house to sunbathe on and our trees as places to seek shade - but with none nesting. So it was a thrill last year to have two pairs of Barn Swallows nesting on our property and this year one of those two nests has been repaired and occupied again. I admit to a special fondness to hirundines. As a small boy, I decided that House Martins were my favourite bird and whilst sharing my name with them was surely one of the reasons for my decision, I also loved to watch them in the skies above our village. There was an old half-timbered pub down the road with a grand House Martin colony and they struck me as cheerful and friendly, chirruping away as they worked on their nests, a throng of constant activity and so close to human presence. I was fascinated by their mud nests, save for a small entrance-hole a closed structure hanging from the eave and wall, made from hundreds of little pellets of mud, each one brought as a mouthful of mud to the nest. As a ten-year old I tried to emulate these nest-builders, gathering blobs of mud (in my fingers, not mouth!), mixing it with dry grass and forming a cup under the eaves of a small shed. I did not have the care nor the patience of the House Martins, and soon my blobs became lumps and although the nest would be finished within a day, it would fall off in big chunks soon afterwards.

In the second week of May this year we noticed that a pair of Red-rumped Swallows had started taking an interest in our porch. They have a lovely nasal twanging sort of call, that really does seem conversational and we would sit in the kitchen, listening to the Red-rumped Swallows chatting just outside the door. They liked to perch on the hook that I had put up a couple of year's ago for Claudia's hammock. Our pair of Barn Swallows nesting nearby seemed rather antagonistic at first to the Red-rumps and on one night the Barn Swallow pair roosted on the hook itself, as if to say "we do not want you here". However, if you look closely enough at Claudia's picture (taken on 12th May), you will see some tiny splashes of mud on wall near the Barn Swallows.. 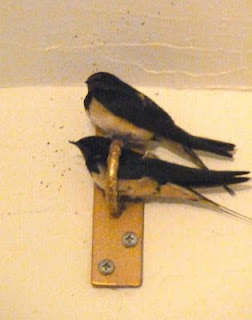 Clearly the Red-rumps had made some initial progress in getting a nest started. Sure enough on the photo of 14th May, the base of the cup is clearly visible and after that work started in earnest. 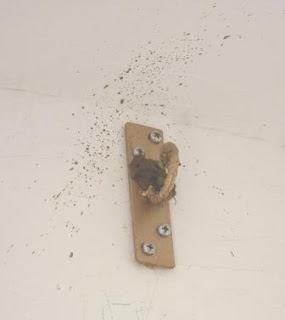 Just three day's later (17th May) the nest looks like a fully-formed Barn Swallow nest, but for the Red-rumps there was still much to do. 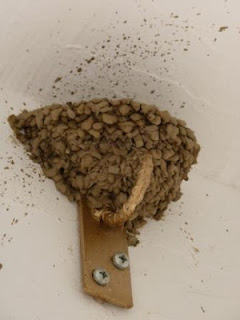 By 22nd May the cup was staring to close, 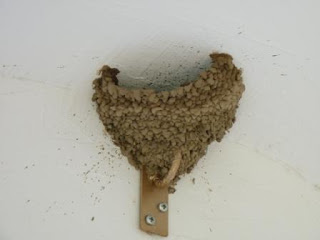 with the nest looking rather like a House Martin's the following day (23rd May).... 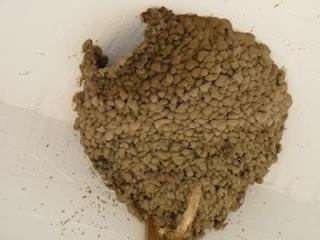 On 26th May, the nest was complete (12 days after the nest-building had started properly) and the pair were starting to line it with fine grasses. 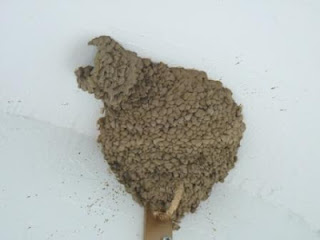 In a fascinating paper by David Winkler and Frederick Sheldon published in 1993, they looked at the evolution of hirundine nests. It is thought that the early swallows made nest burrows (as indeed some, such as the Sand Martin, still do) and that the habit of constructing a hanging-nest from mud appeared once in the evolutionary tree of swallows (and swallows are the only birds that make this type of nest) possibly as an innovation to occupy areas where nest cavities or suitable substrates for burrowing did not exist. The subsequent elaboration of design may have happened for various reasons. One idea of why the Red-rumped Swallow has a closed nest with a long, narrow entrance is because the pair usually mates inside the nest and this reduces the likelihood of the female copulating with intruding males. Certainly, as with many birds, the male sticks pretty close to the female at all times at this early stage of the breeding cycle and a few days ago I saw a third Red-rumped Swallow being chased away from the site.

And so this summer we look forward to the delightful company of the Red-rumped Swallows in our porch, my only headache now is to find an alternatve site for Claudia's hammock!

Anonymous said…
Hi, I don't know a lot about birds. I have a nest of Red Rumped Swallows. I can't find detailed information of their nesting habits. The parents seem to have dissapeared with (I assume by now) fledglings still in the nest. I don't know if this is normal or if something happened to the parents. Its only been 1 day since I have seen them. I can hear the little ones inside.
7 August 2015 at 10:36