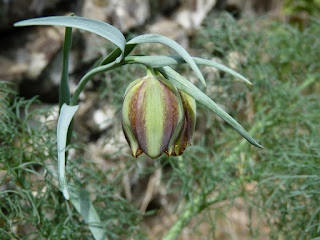 Whilst last spring the flowers were quite breathtaking, this year has been a real contrast, owing to the very severe drought. Finding orchids has been a real challenge, with flowering much later than normal, plants smaller and much sparser. Several species which were easy to find by this time last year have yet to appear. I wonder if they will. So it was with some trepidation that I ascended a green path, close to our home, a walk I do several times a year and always, always in late March. Not only does the track offer great views of the village, nestled in the hills, but the flowers at the base of the old stone walls and in the adjacent old olive groves form a sort of milestone for me in the progression of spring. I feared that some of my favourite plants were be hard to find, or even absent altogether. I was relieved and happy to find out that I was wrong.  Stunning as always was the noble Iberian Fritillary (see the photo I took today) and several specimens were growing on either side of the track, tucked in close to the wall. 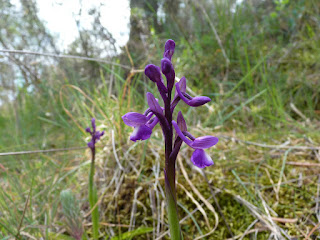 Champagne Orchids were bursting into flower (also photographed), dotted between ancient olive trees and beside patches of flowering rock roses and French Lavender. A few Conical Orchids were present too, but no sign of Sawfly Orchid which is usually findable at this time of the year. These resilient survivors gave me encouragement. There  are places, refuges where for reasons of micro-climate, soil depth, aspect, less grazing pressure and other subtle factors, plants can buck the trend, where if one looks hard enough these plants can be found. Above me a pair of newly arrived Booted Eagles were heralding spring, calling and displaying, and whilst  I retraced my steps,  immaculate Green Hairstreak and Marsh Fritillary butterflies were also looking for flowers, reinforcing further the sense of optimism I had secured on my short afternoon walk.
Iberian Fritillary Orchids