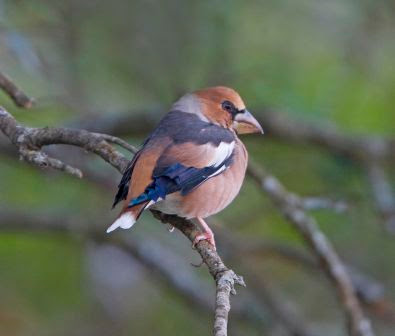 I returned yesterday from the morning school-run and parked the car in the drive beside our Judas Tree. In the last couple of weeks it has shed its leaves and it will be bare now until Easter when its buds will open to an explosion of deep pink. A quiet short call drew my attention and I looked up. A Hoopoe sat perched above me - that didn't make the noise. And then some movement. Close to the Hoopoe a Lesser Spotted Woodpecker was busy looking for food, tapping away on a dead snag on the tree. I quietly withdrew and entered the house, leaving this sparrow-sized woodpecker in peace to continue foraging. Looking out of the dining room window into our olive orchard, a party of House Sparrows was pecking away on the ground, whilst close by a party of the slightly more robust Spanish Sparrows were doing the same. A couple of Chaffinches were nearby. But dwarfing them all was a splendid male Hawfinch (see John Hawkins' photo), also on the ground, looking for fallen olives. Its rich mustard brown cap contrasted with its grey bull neck, whilst the fascinating curled feathers on its wing were like the blue-black ink that I used when I owned a fountain pen.

Lesser Spotted Woodpeckers and Hawfinches, two of my favourite birds and both with special meaning to me. As a twelve-year old I used to explore the oak woods near Abergavenny in South Wales, on the edge of the Black Mountains. Forty years later I can still vividly remember the morning that I descended a bracken-covered clearing towards a line of trees along a field boundary, spotting some movement high in one of them and my elation in realising I was watching my first Lesser Spotted Woodpecker, a long sought-after species for me. Not far from that spot, that same year, I discovered a place where Hawfinches could be found and I can still picture the first one I saw, typically perched on the top of the tallest tree.

Here in Extremadura both species are not uncommon and I see both in our garden. Hawfinches are almost daily visitors (although harder to see in April when they are breeding), whereas Lesser Spotted Woodpeckers are less regular. However in late winter and early spring I can hear a male drumming most mornings, and sometimes it will do so on the wooden telegraph post beside our front gate and indeed in the same Judas Tree that I saw the bird feeding in. In Extremadura they seem quite associated with cork oak trees and it must be more than a coincidence that close to us are ancient cork oaks, planted along boundary lines.

The pair of White Stork are back on their nest on the village church, whilst the first Barn Swallow was seen over the garden on 22nd January. Yesterday evening as I took Patrick for a seven-a-side football match, a party of Barn Swallows were feeding over the lake in the town park in Trujillo whilst above them my first House Martin of the year headed to the town centre.
Barn Swallow Extremadura Hawfinch House Martin Lesser Spotted Woodpecker

Martin Kelsey at Birding Extremadura said…
Thanks for the comment. The first Barn Swallows are usually turning up by the end of January here. A few individuals overwinter (there has been an overwintering Red-rumped Swaloow this winter in Trujillo). But the party feeding in the park were clearly new arrivals, as it is a spot I visit a couple of late afternoons each week and this was the first sighting of them there.
29 January 2012 at 11:19