Extremadura in the British Birdfair 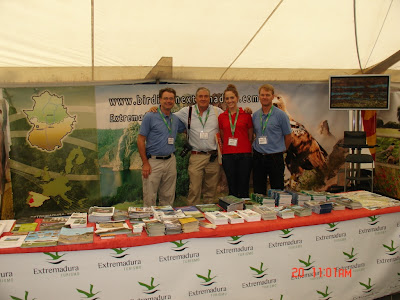 We are over in England at the moment and last weekend took part in the team of colleagues from Extremadura to promote the region on the Extremadura stand at the British Birdfair in Rutland. For those of you who have never been to the Birdfair, it has been likened to a Glastonbury Festival for birders. Indeed, a friend Peter Dunne from New Jersey Audubon Society told me at Rutland, that after revisiting the Birdfair after a ten year absence he was struck how it had changed from being like a trade fair, to becoming a real Festival (or fair in the traditional sense of the word). Yes certainly business is done, contacts are made, books are launched and products are bought, but key to its success is that people have a great time, it is a really enjoyable gathering. As well as the hundreds of stands of exhibitors promoting great birding destinations, equipment, artwork, photos, local and international charities, there are lectures and events, celebrity happenings and activities for children. What is critical to its sustainability, longevity(this year's Birdfair is the 23rd) and indeed contributing to its unique character is the volunteerism. In 2010 no fewer than 280 volunteers were involved (amazingly for an event that attracts well over 20,000 people and 350 exhibitors, there is only one full-time staffer and not a cent comes from government subsidy). The volunteers save the Birdfair £50,000 in labour costs, all of which goes towards the quarter of a million pounds or so that the Birdfair contributes annually to international conservation. This year the conservation theme was the migration flyways linking Europe and Africa. Because all proceeds go to conservation, combined with the volunteer spirit, there is a real sense of family and goodwill - from the visiting public contributing through entrance fees to the loyalty and support from exhibitors: we all feel part of something big and hugely worthwhile.

It is also like a reunion of friends and family. I meet people I have known for over thirty years and it is always a joy whilst on the Extremadura stand to catch up with people who have stayed at our house El Recuerdo over the years. One shares the celebration of friends as books get launched - David Lindo's wonderful book on becoming an Urban Birder is thoroughly recommended.

Extremadura has had a stand at the Birdfair longer than any other Spanish region. I work full-time on the stand along with my colleague Godfried and a representative from the Extremadura Tourist Board, this year Karissa. We are in the photo above with Tim Appleton (co-organiser of the Birdfair on our stand). We are always accompanied by friends (other guides and guesthouse owners) who come to promote their businesses.

Post Birdfair, Claudia, Patrick and I are having a short break in Cley, where my parents live at North Norfolk. It gives me a chance to see some birds that we do not get in Extremadura, as well as helping me track the changes happening to British birds. It is almost twenty years since we moved from Britain and whilst British-based birders now have gotten used to seeing Little Egrets on the Norfolk coast and elsewhere, I still double-take when I see one fly over my path in Cley (thirty years ago my friends I raced across the county to see a Little Egret). A flock of Spoonbills is now a regular sight here. However, I also reflected whilst watching a fine male Red-backed Shrike yesterday that this is now extinct as a regular breeding bird in the UK, whereas on my first visit to the RSPB reserve of Minsmere in the late 1960s, there were pairs nesting beside the carpark there and along the footpath to the beach.
British Birdfair Extremadura