The allure of the Black Wheatear 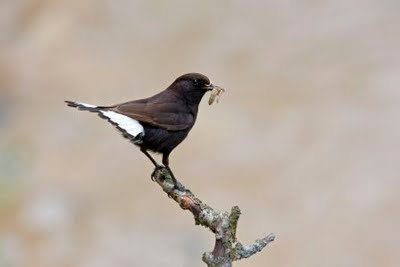 It is a funny old spring here...after weeks of hot dry weather, most of the last three weeks have been wet. The landscape that was starting to turn yellow has been reinvigourated almost beyond belief, with grass shooting up, which makes finding Little Bustards quite a challenge. The late spring flowers are putting on a grand show - yesterday Claudia and I came across a meadow near us with a dark pink hue thanks to hundreds of wild gladioli. After most of the last few weeks in the field with guests, I dodged the showers of the last few days to put the vegetable garden back in order, discovering the rows of onions, garlic and beans amongst the rampant vegetation of my neglected plot. Tomorrow I head to Madrid to pick up two more guests coming for a week's birding holiday here. It does not matter how many times I have collected clients at the airport, the sense of trepidation remains. What will their expectations be? What is their preferred pace? What do they particularly want to see? Unlike someone who takes tourists around castles and churches, I cannot guarantee that any of the species my guests want to see will be at the desired date, time and place. My subjects are free and wild. If we do not find a sought-after species where I hope to, my guests will count on my experience and local knowledge to find it somewhere else. Success will depend on that experience, plus a reasonable dose of luck and good fortune.

One of the most sought-after species is the Black Wheatear, a species resident in rocky places found just in the Iberian Peninsula (with a few in southern France) and north-west Africa. It is rather enigmatic, especially here in Extremadura. There is a lot of suitable habitat for it, but it is rather scarce. I am worried too that the species may be declining here - places where I always used to find it have been strangely bereft of the species. But even where the bird is still present, it can sometimes be very easy to see, perched confidently on high pinnacles and crags, but sometimes apparently absent. They have rather large territories and the very nature of their craggy habitat, can make it easy for them to slip out of view. I took a couple of guests to a favourite spot of mine where a river cuts a deep gorge. For an hour we waited, enjoying magnificent scenery plus a good selection of birds of prey drifting overhead. Just as we were about to leave, almost on cue, onto the stage swooped a male Black Wheatear, its brilliant white rump and tail (just barely tipped black) contrasting with its black body and wings. It gave its quiet song from the roadside and then parachuted down, tail fanned, down the scree slope. Black Wheatears are rather large for the genus with short, rounded wings which are ideally suited for drifting and gliding downwards on cliffs and rocky slopes. They nest in holes in old buildings, walls and crevices. Like some other wheatears, the male brings stones to the entrance of the nest, sometimes as heavy as 10g and in one case weighing apparently 28g which is about two-thirds of the bird's weight! According to the Handbook of the Birds of the World, thousands of small pebbles can accumulate at the nest entrance of sites used in successive years. The photos with the this posting are taken by John Hawkins and the second one shows a female (rather browner than the male) carrying a lizard almost as long as she is to the nest..to give to the nestlings! Like another favourite of mine, the Bonelli's Eagle, Black Wheatears are simply evocative of crags and old castles, set in magnificent rocky landscapes, a vivid black-and-white allure and certainly a wonderful enigma. 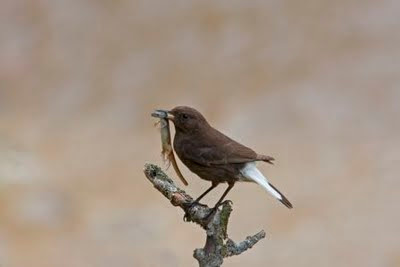