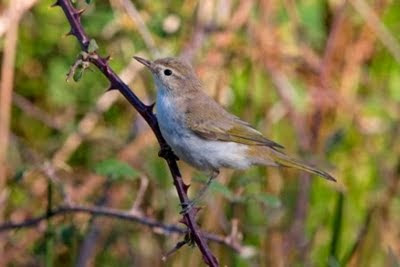 Throughout more or less the whole of the first part of spring I have been sharing my enjoyment of the birds and other wildlife in Extremadura with guests who I have taken out into the field. Almost the whole time, the sun has been shining and the temperatures have been more like May than early spring. Just this week, we are being rained on (the land needs it desperately) and this break in the weather has matched exactly a few days to be based at home. It is a great opportunity to take stock of the season so far. Most of the summer migrants have arrived on cue and the rest somewhat earlier than usual. Observers in many countries are recording arrival dates of migrant birds and these are showing a trend for some species to be arriving a little earlier each year. The same is true in Spain. This year's big surprise in this respect were the Red-necked Nighjars, which were first heard in our village on 10th April, a good week or so before I usually hear them from home. Melodious Warblers also were particularly early. Being out every day is far from boring...every time I am in the field, there will always, always be something memorable that draws my attention, provides a surprise or simply becomes a special moment to treasure. Never more so than during migration time when the panorama changes every day with new arrivals, species passing through. One can visit the same site several days in succession and the mixture of species seen will be different everyday. Two moments stand out in this respect. One was a morning drive along a quiet road in the plains to the south of us. We had watched the magnificence of displaying Great Bustards and I stopped a few hundred metres further on because I had heard the soft bubbling call of Black-bellied Sandgrouse. But something else caught my eye..something large, brown and white in the field. I checked with my binoculars. It was an Osprey. This fish-eating bird of prey is a migrant here and a species one quite often finds at our reservoirs or along the large rivers, but here was one sitting in an open field in the steppes...indeed two Black-bellied Sandgrouse flew across my field of view - now those and Osprey in view simultaneously..wonders will never cease! 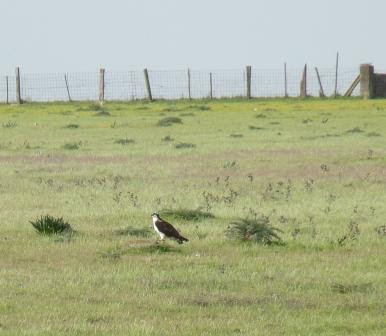 The next moment was more subtle. We were standing beside a gravelly pool. In the tamarisk and willow bushes beside us warblers sang: Melodious, Cetti's, Willow and Western Bonelli's (this spring has seen a good passage of them across our area: see John Hawkin's photo at the start of the post), along with a Nightingale. On the pool in front were Whiskered and Gull-billed Terns, a few Collared Pratincole, some passage waders (Dunlin, Little Stint, Ringed Plover) and some resident species (Kentish and Little Ringed). As we scanned the water's edge we came across a fine Stone Curlew and just when we thought that fifteen minutes could not be more productive, a Spoonbill came in to feed. All we had done was to get out of the car, walk a hundred metres and then stand in the shade of a large willow tree. Another special moment had become fixed into our memories.
Birds Black-bellied Sandgrouse Extremadura Great Bustard Osprey Spring migrants Waders warblers

Oretani Wildlife said…
Yes it´s a wonderful time of the year, every day something new. We´ve got to back to Extremadura soon.
25 April 2011 at 19:29