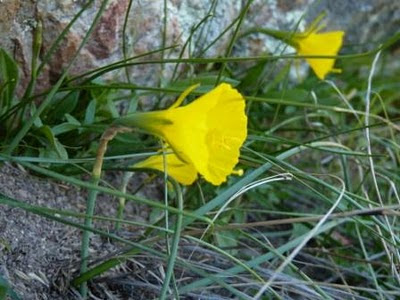 Throughout early spring there really is no better place to be than out on the plains of Extremadura. The mosaic of traditional rotation low intensity farming provides a long list of attractions. The obvious may be the lekking Great Bustards or displaying Montagu's Harriers, but the more understated can be just as memorable. Throughout February and most of March the early spring flowers start adding a delicate set of colours to the landscape, just before the exuberance of the artist's palate that is April. Sand crocuses and the gorgeous Barbary Nut Iris, for which you need to be out in the afternoon to see at its best, as the flowers remain resolutely closed in the morning. Searching carefully one can find Sawfly Orchids as well. One of my favourites are the wild daffodils, or really narcissi. The first is the pale yellow Angel Tear's, a wonderful name befitting its drooping, nodding tear-shaped flower (Edited comment: Brians Banks has just sent me this: In 1888 a British plant collector used a boy called Angel to clamber up a steep rocky bank to collect bulbs of this plant. The weather was hot and the boy was cross and apparently he burst into tears. The bulbs were labelled after this event....Reported in "Narcissus, A guide to wild daffodils", by John Blanchard. Pub. Alpine Garden Society. The boy's full name was Angel Gancedo, and the incident took place in the north west of Spain. The British collector was Peter Barr. Story was reported 45 years later by his son in 1933). Ah well, whenever I see this plant again, I shall think of poor Angel Gancedo!

Following on is the bolder Hoop Petticoat Narcissus (see my photo) which can sometimes form carpets on fallow fields, all the flowers pointing in the same direction. In damper areas, Common Jonquil is another narcissus, which is just finishing flowering now.

If the narcissi provide visual delight, then it is impossible to be out on the plains without a constant backdrop of lark song. The most distinctive is that of the Calandra Lark, whose song is crammed full of mimicry of other species: Swallows, Goldfinches and Green Sandpipers, to mention just a few. They are rather gregarious and as soon as one starts singing, others rise from the ground to join-in. Thekla Larks are also renowned for their mimetic songs, not as diverse as that of the Calandra, but more so than the confusingly similar Crested Lark. Like the Calandra, they will rise sometimes to great height, when set against a clear blue sky they can be very difficult to locate. At the edge of the plains, where the open dehesa woodland starts, the sweetest song of all can be heard. The Woodlark too will be airbourne on a sunny morning, although they can also be singing in the middle of the night. Spring flowers and lark song boost one's senses and one's spirits in such an embracing way.
birding Calandra Lark Crested Lark Extremadura Larks Narcissus Thekla Lark Woodlark