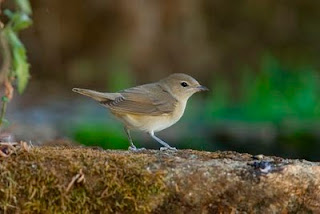 We returned from a week's holiday in Galicia and the following morning I heard a rather rich, mellow song coming from deep in the foliage of an almond tree in the garden. It threw me for a moment, I could not place it. It was clearly a Sylvia warbler, but was not right for Blackcap, which is a common bird here, especially in the winter. I caught a glimpse of movement in the tree and then saw the bird. It was a Garden Warbler. I reflected that it was probably the first time in over fifteen years since I had heard their song, the first time since we left the UK, that is. They do not breed in our part of Spain and although I see them on passage every spring and autumn, this is the first time one has taken up temporary residence in the garden. "Of course" I said to myself, mentally kicking myself for not recognising the song straight away, especially since separating the rather similar songs of Blackcap and Garden Warbler was one of the tests my father frequently gave me when I was a small boy! I am rather fond of Garden Warblers. They have an understated brownish-grey appearance (usually unkindly described as nondescript), which I think makes them look warm and soft, especially with a dark beady eye and rather stubby bill.

The Garden Warbler is using our garden as a stepping stone, a refuelling stop on its long migration from central Europe to southern Africa. August and September are particularly interesting in that respect, suddenly birds which neither breed or winter locally make an appearance and make themselves at home amongst the shrubs and trees next to the house: Willow Warblers, Whitethroats, Pied and Spotted Flycatchers, Common Redstarts. I wonder if the same individuals come back for a few days each autumn. I suspect so. In 2008 and 2009, a Western Bonelli's Warbler was in the garden on almost the same dates...surely the same bird was concerned. It is well known that most migratory birds return to their same breeding territories each spring. When I was doing research on Marsh Warblers wintering in southern Zambia (where Garden Warblers were also common in winter), almost 50% of the birds that I had ringed in one winter were back in the same site the following year. If one assumes that the annual mortality rate for a small bird like that could be about 50% as well, this would mean that almost all of the birds surviving from one year to the next had returned to the same wintering site. This I found remarkable and made me feel humbled thinking about the extraordinary navigational skills of these small birds. If one takes a flight across the Sahara, one can spend hours staring out of the window onto to a vast featureless inhospitable landscape. All of these birds are successfully crossing the desert and for those heading for southern Africa the journey is still far from over. It amazes me that through a combination of mapping the stars, having an internal chronometer as well as memory of visual clues, a bird weighing just a few grams will return to a clump of trees and bushes each year in the spring to nest and to another favoured patch of trees and bushes in the southern hemisphere to spend the winter. Our garden provides a vital stepping stone for a few individuals for a few days as part of their extraordinary journey..I watch this Garden Warbler in awe and admiration.
autumn Common Redstart Extremadura Garden Warbler migration Pied Flycatcher Spotted Flycatcher warblers Western Bonelli's Warbler Willow Warbler