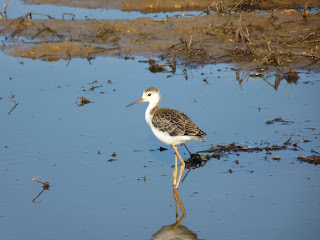 In my last blog I described hearing a Green Sandpiper over the garden in the middle of a warm night..this morning I visited my favourite spot in the nearby rice fields to see what waders were starting to appear. I left the house before dawn, seeing a Red-necked Nightjar settled on the road leading out of the village. I reached my destination just as the sun was rising, showering a golden light over the lush green paddies. Practically all of the fields are deep in growing rice and apart from White Storks, Cattle Egrets, Little Egrets and a few Black-winged Stilt and Lapwing, it is hard to see very much amongst the crop. It is deceptive, because large flocks of Mallard with a few Teal flew up from these fields, where they had been feeding overnight, quite invisible. Much more productive would be the the few fields which for some reason had been left muddy with no crop. Open wet mud...ideal for waders. These indeed were thronging with birds...lots of Black-winged Stilts (I counted at least 350) with a small number of juvenile birds as well (see the photo..taken this morning) which were presumbaly from local pairs. About 40 Collared Pratincole, again with barred juveniles present. An astonishing number of Little Ringed Plover (at least 370 in three adjacent fields), along with four Kentish Plovers. I wondered if these again were local birds, concentrating here because of the ideal conditions, or whether some of these were from further afield. Gull-billed Terns hawked overhead and a post-breeding party of about 70 Calandra Lark flew over.

However, it was the waders on passage from further afield that I always find most intriguing here, deep as we are in inland Spain, and I was not disappointed: Greenshank, Redshank, Green, Wood and Common Sandpipers, Ringed Plover, Ruff, Black-tailed Godwit, Dunlin, even a single Whimbrel. A total of 14 species of wader all told..and autumn passage is only just starting!
Extremadura Red-necked Nightjars rice fields Waders White Stork