Kaleidoscope of flowers and raptor rapture 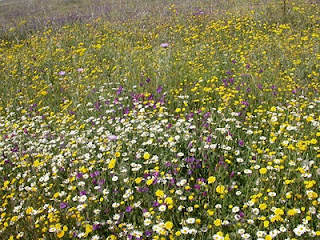 It had been a great day, the morning on the plains with good views of Black-bellied and Pin-tailed Sandgrouse, a bachelor group of 15 Great Bustards, Tawny Pipit, four species of lark and lots of Montagu's Harriers. At lunch we had watched a Little Bustard calling amidst a field of kaleidoscope colours of masses of wild flowers. Then, just as mid-afternoon approached, the temperature was edging upwards and what could very easily have been the quietest part of the day, we had what could only be described as fifteen minutes of sheer magnificence. We had stopped to take a walk, beside a field where hay was being baled. I spotted an immature Golden Eagle, quite low over the back of the field, apparently searching the cut hay for any prey. We watched it as it hunted, with the farmers working the machinery in the foreground. We then heard the barking of a Spanish Imperial Eagle and an immature flew swiftly in from the right, intent on chasing the Golden Eagle away. A pursuit ensued, the slightly smaller Spanish Imperial Eagle mobbing the Golden Eagle vigorously. As we watched them, something caught my eye above us. It was another Golden Eagle, this time an adult, soaring above us. We then noticed that below it was another juvenile Golden Eagle! Three in the sky at the same time!

A second juvenile Spanish Imperial Eagle arrived on the scene and flew low and rather heavily to the left and then back again in front of us. Less than a minute later an adult Bonelli's Eagle flew past, chasing the imperial! Above us a second Bonelli's appeared soaring high amongst Griffon Vultures. The first Bonelli's returned, giving us a superb flypast.