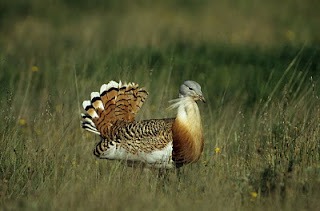 Sometimes people ask me to guide for a full week, which is great because it means that we can visit the full range of habitats at hand, revisit special sites and if we miss a species at one place, there will also be an opportunity of going to other places where I know the species occurs. Other people book me for a day, which usually means a short visit to the plains followed by Monfragüe National Park for raptors. Usually we find everything that we want, sometimes because of weather or simply the unpredictability of wild birds, we fail on one or two species...that's birding. I have just completed two day's guiding for Steve and Rochelle who came with some very specific requests: Black-winged Kite, Great Bustard, Collared Pratincole, Pin-tailed and Black-bellied Sandgrouse, Great Spotted Cuckoo, Roller, Golden Oriole and Eagle Owl. That was my challenge for last Sunday and yesterday (Tuesday)...on Monday they did their own thing.

Day One: Sandgrouse can be tricky so first thing on Sunday morning we went to a favourite spot of mine, where I had seen both species a few days' earlier. As we arrived a distant Great Spotted Cuckoo flew across a field, whilst a male Little Bustard stood and called. Stopping to scan, I found two displaying male Great Bustards, with a few females close by. We had arrived early enough to avoid the heat haze and the views were magnificent. Whilst watching them, I heard and then saw two Black-bellied Sandgrouse dropping into a nearby field. We headed in that direction and quickly found them, along with about ten others. The heat shimmer was starting, but we could watch them reasonably well as they foraged in the short vegetation of a fallow field. Fortunately, six Pin-tailed Sandgrouse came in to land beside them...that was good luck!

We then moved onto another area of open ground where nestboxes have been put on telegraph poles for Rollers. A Roller was perched on a cable nearby. It flew towards a box, seemingly occupied by Jackdaws. Its mate flew in to join it and then ensued a noisy interaction between the Rollers and the slightly larger Jackdaws. The Rollers sought to displace the Jackdaws, which sat resolutely on the roof of the box, one curiously striking the roof with its bill, making a knocking sound. Great views.

From there to a reservoir, usually a good haunt for Collared Pratincole. I saw one fly away as we arrived, but the views were poor. The water level was very high and the island usually occupied by nesting pratincoles was under water. We decided to drive along a track along the opposite shore. We stopped and watched as about six Collared Pratincoles flew close by, some of them settling on a small spit alongside a group of Litle Tern. So far so good.

Then to Monfragüe and after lunch at my favourite picnic site to watch nesting Griffon Vultures and Egyptian Vultures, we headed to a site called Portilla del Tiétar. It is wonderful spot, and to the north the snow-capped Gredos mountains were visible. As we walked to the viewpoint, my attention was drawn to a small swift flying low overhead with a rapid wing beat. As I watched it twisted and turned a few times, showing well its narrow white-rump. White-rumped Swifts do not usually arrive until May..this was an exceptionally early arrival. We did not have to wait long before a fine adult Spnaish Imperial Eagle appeared from the north, carrying a large snake. It flapped rather laboriously, making slow soars before disappearing from view. We stayed on for an hour or so, carefully scanning the rock face in front of us for Eagle Owl, but with no success. However, very pleased with the day's results, we headed back home, stopping briefly at the Salto de Gitano viewpoint in Monfragüe where we were not only rewarded with another Spanish Imperial Eagle, but also a second White-rumped Swift, this time high about the rock face opposite.

Day Two: We had Black-winged Kite, Golden Oriole and Eagle Owl still on the needed list, but I also wanted Steve and Rochelle to have better views of Great Spotted Cuckoo. So first thing we headed to a particularly good area for them, and a pair was seen flying past just as we entered the area. We could not find any others, so we returned to the initial spot and back to the main road. The birds reappeared, and luckily I knew of a good pull-of just a hundred metres down the road. There we parked and waited....because the birds were heading in our direction! Over the next few minutes we had wonderul views of three Great Spotted Cuckoos, with interaction between them and Magpies, as well as what seemed to be a territorial spat between the cuckoos themselves. Great!

Then up the road to a site where we found easily a pair of Black-winged Kite which we watched as they perched on dead trees and flew over the fields. From there we went up a beautiful small valley where the trees echoed with the sounds of calling Golden Orioles. At first, we were only getting flight views, but at last a male flew to an exposed perched and gave us superb views.

We then returned home, our plan being to rest a bit in the afternoon and then head out after dinner for another attempt at Eagle Owl. During the afternoon, Steve and Rochelle had a shortwalk, coming back overjoyed having had good views of a Wryneck...a real bonus!

We set off after an early dinner and arrived at the Portilla del Tiétar at just after 8.30 pm, just as an Eagle Owl started to call softly. It stopped shortly afterwards and didn't really resume until after 9.15 pm, by which time the light was starting to fade and the bats had emerged. As it got darker, the frequency and volume of the calls increased: there were clearly two adults and the yelping begging calls of young were also audible. It was a magical experience, hearing the deep hoot resonate across the narrow valley, with the sound of Red-necked Nightjars in the background. Suddenly movement was seen and one of the adults flew north, off to hunt, a large powerful bird, gliding more than flapping. The remaining adult continued calling until it too flew off, this time east and directly low overhead.