Urban Birding with the Urban Birder 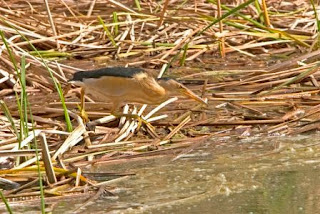 Mérida is the capital city of Extremadura with a very important Roman heritage. One of the most impressive features is the Roman bridge which spans the Guadiana river right in the centre of the city. As well as an extraordinary historic site, it can also be one of the best places for birding in Extremadura. I was there at dawn on Wednesday with David Lindo (aka the Urban Birder - see his website www.theurbanbirder.com) and his photographer Russell Spencer. David is a passionate advocate of the joys of urban birding, demonstrating what tremendous opportunities there are in towns and cities around the world. Most people live in cities and yet many overlook just what potential there is right on their doorsteps to watch birds and other wildlife. David is a great communicator and on top of that, an outstanding birder - I enjoyed every minute of the two days I had to show David and Russell some of the urban birding opportunities in Extremadura.

In just an hour on the Roman Bridge we had seen Purple Swamphen, Little Bittern, Black-crowned Night Heron, Little and Cattle Egrets, Penduline Tit, Spanish Sparrow, Alpine and Pallid Swifts, as well as great views of Cetti's Warbler, amongst others. An impressive host of species for any site, but here we were in the centre of the city, with people passing by all the time on their way to work. We also visited Cáceres and Trujillo to watch White Storks and Lesser Kestrels: towns that are on the ornithological map and holding international status for their conservation value.

We sneaked a quick visit to areas close by as well: hearing the first Common Cuckoo of the spring, watching a male Great Bustard in practice for the courtship season, seeing a juvenile Golden Eagle mobbing Griffon Vultures and bidding farewell to some of the last Common Cranes of the winter as they flew in a skein high above.
Alpine Swift David Lindo Extremadura Golden Eagle Great Bustard Lesser Kestrels Little Bittern Pallid Swift Penduline Tit Purple Swamphen Urban birding