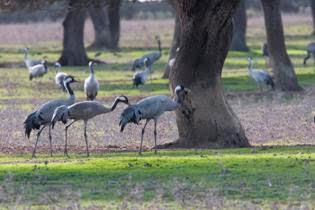 This weekend saw the culmination of the first Crane Festival in Extremadura, sponsored by the Extremadura Tourist Board and with support from SEO/BirdLife and other NGOs. The activities were focused around Moheda Alta, an information and visitors centre in the heart of the most important wintering area for cranes in Extremadura. According to the 2007 census, about 80,000 cranes winter in Extremadura (about 30% of the total European population) and about half of these occur in this central zone, about half an hour from where we live, attracted by the choice of rice stubble, maize stubble and the traditional acorn crop of the dehesa holm oaks on which to feed.

I was involved on both days taking coach parties of visitors from Cáceres and Trujillo to enjoy what the Festival would have to offer. First stop was the Sierra Brava reservoir. This hosts one of the largest concentrations of waterfowl in Spain (third place after the Coto Doñana and the Ebro Delta - and given its much smaller size, the actual number of birds per unit area will be highest on Sierra Brava). Here, somewhere between 100,000 and 200,000 duck, mainly dabbling duck, spend the winter. These too are attracted to the stubble fields, where they feed during the night, spending the day roosting on the reservoir. The sight is remarkable, a vast carpet of duck quietly resting. We then entered the rice growing area and soon large feeding groups of cranes were seen. We had sightings too of Black-winged Kites - this is one of the best places in Extremadura to see this attractive bird.

At Moheda Alta, we took the visitors on guided walks and there were stands, exhibitions, talks, activities for children and a local folk dancing group. Throughout the day, parties of cranes flew across the Festival grounds, at one point joined by a soaring Golden Eagle. Probably about 500 people took part over the two days, not bad for the first event of its type and I am sure that the organisers will be encouraged to make this an annual event. It is very important to build up interest amongst the people of the area about this wonderful bird, which already has such a high profile in the culture and folklore of peoples in northern Europe. It would the great to see links between the Festival here and similar events elsewhere in Europe. Cranes are such a prominent part of the winter scene in Extremadura, yet the most important roosting site of all is under threat from two large thermal solar plants.

On both days in the late afternoon, we repaired to a vantage point offering a superb view of the ricefields, dehesa and sierras in the background. As darkness fell, large parties of Grey Lag Goose (several thousand in all) flew from the feeding grounds to roost on nearby reservoirs. Skeins and lines of Cranes started crossing the sky, hundreds and hundreds, the adults giving their bugling call, the young birds their higher-pitched whistles. It is without doubt one of the most beautiful spectacles nature has to offer.
birding Common Crane Crane Festival Extremadura Martin Kelsey