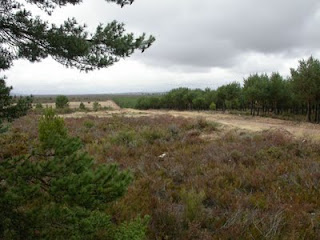 Last weekend I went with my son Patrick to the province of Zamora (in Castille y Leon) to stay with some Dutch friends in the village of Villanueva de Valrojo, on the edge of the Sierra de la Culebra reserve. Zamora holds one of the highest densities of Wolf, outside Alaska and Siberia, and there are sites near the village which offer one the best chances of seeing this magnificent, but very shy, animal. Within a couple of hours of arriving we were positioned on a hillside, overlooking an expanse of heathland and a pine wood. Rangers put out carcases from time to time at the edge of the wood and from the number of Griffon and Black Vultures present, it was obvious that a carcase had been placed there recently.

The view from our vantage point was superb. In the distance were the peaks of the Sierra de la Cabrera, in the foreground the mosaic of heathland, woodland, rough pasture and small stubble fields providing Wolves both cover and hunting grounds. Two alert Red Deer appeared on the heath, making their way with great caution across the open ground, somehow seeing much more alert that those that I am used to seeing in Monfragüe National Park, where, alas, there are no longer Wolves.

Suddenly my friend whispered "lobo" (wolf) and there, along the edge of the pinewood, I saw my first Wolf. It was a large male and it sauntered along in the open ground. It disppeared behind a pine tree and then we found it again, this time a few metres inside the pinewood, pulling at the ribs of the carcase. Despite the falling light and our distance, the views were incredible. Somehow, seeing the wolf inside the wood this time added more magic, as often we saw just fractions of its body behind the tree trunks. Patrick was excited, especially when he saw it do a "poo" (I missed that!).

It slinked off into the wood and darkness fell. We were to go out the following morning and evening, but we did not see another Wolf. During our stay we had views of Otter, Fox and Red Deer, as well as a good selection of birds such as Crossbill and Firecrest. But the highlight of course was the Wolf, a top predator in a open, unfenced landscape - it was easy to see why this region is such a stronghold. Just a few days beforehand the prize-winning photo of an Iberian Wolf jumping over a gate at night had been published by the BBC Natural History magazine, it had whetted the appetite for our visit and we left supremely satisfied.
Iberian Wolf Martin Kelsey Zamora

Unknown said…
Hi Martin - A fascinating story. I'm a journalist and am heading to Zamora next week to research an article on Iberian wolves. I'd also like to spend some time trying to photograph the animals in Zamora. You mentioned in your post that rangers put out carcasses from time to time - do you have any advice as to where I could find such a drop zone or who I might be able to talk to? Any advice would be much appreciated. My email address is james.howe100@gmail.com

Cheers, hope to hear from you soon!